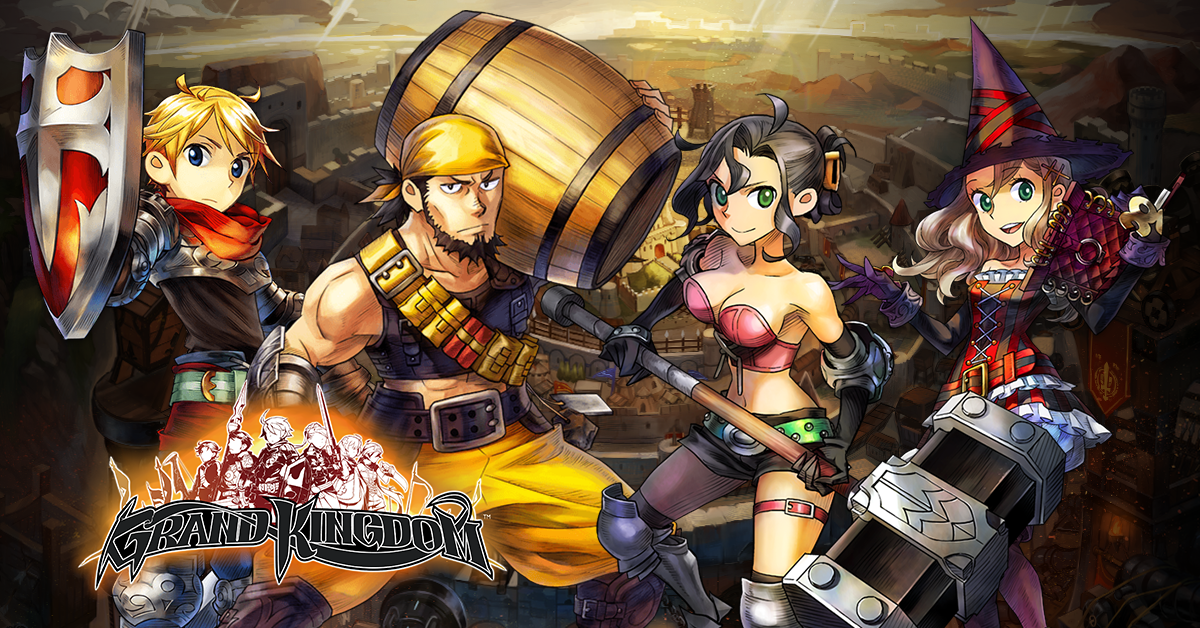 Everyone has their favorite gameplay style, right? I flip-flop between wanting to tank everything and needing the excitement of living life like a glass cannon. Since Grand Kingdom lets you put together squads of up to four units from various classes, you can be super flexible with how you want to live your mercenary life. It's important to consider the types of units in your squad though, because a careful balance exists between them.

There are three basic class types that operate on a bit of a 'rock-paper-scissors' mechanic: Melee, Ranged, and Magic units. Melee units can have trouble dealing with Magic units, but if they get in close under the guard of Ranged units they can do real damage. Ranged units can give Magic units a beating, but need to be careful with Melee enemies. And then those Magic units—if you haven't guessed yet—can do real damage to Melee units, but may end up struggling with Ranged foes. In addition to these unit types, there are also Specialist units that fulfill very specific roles in battle. You can discover more about each type of unit on our website update, but for now I'll dive in to each type for a closer look!

Well, obviously we're gonna start with the melee units. These guys do a lot of what you'd expect from melee classes. They like to get in close and duke it out with the enemy. If you're looking for a melee master, you'll be picking from a solid group.

Each of these classes has some interesting nuances in their use, so make sure to check out our character page to see a bit more about them. Now, that face-first attitude is gonna leave them a little bit exposed to certain types of enemies, but if makes them ideally suited for turning the lights out on our next group of units, the ranged classes.

I mean, what would you expect from a fellow fighting with a gun or bow? It's hard to fend off somebody's sword with your bowstring. These units are invaluable to include in your team, and depending on the lay of the land you're fighting on, they can have some pretty awesome advantages.

Playing with ranged units can take some getting used to as your button timing can actually impact whether they manage to hit an enemy with a volley of arrows, or if the dirt just gets a little more pokey. I personally love the feeling of landing a perfect succession of arrows, or splitting my damage between foes. If you use them right, they can make quick work of those meddling magic users hiding in the back lines...

Not all magic users are meddling. But sometimes, that's just what you want. These units can wreck havoc on the front lines of enemies and leave their defenses wide open for the rest of your mercenaries to slice-and-dice.

Because of their AoE skills and ability to tear holes in the opposition, you'll probably find yourself making use of magic units to stomp out melee classes before they get close enough to make your ranged units into filet mignon. Of course, someone could always throw a wrench into your perfect rock-paper-scissors strategy by employing a unit with a very special use from the, wait for it, specialist category.

Don't forget about these guys, dood! Specialists are units that don't quite fit the mix of any of the more 'regular' classes. They each have something special to add to a team, but they also have drawbacks, so you'll want to use them carefully!

That pretty much wraps up the standard classes in Grand Kingdom! As a special bonus, we've decided to include the Noble class standard with every copy of Grand Kingdom! In Japan, this class was DLC, but we'll be making sure that everyone has access to her expert offensive abilities! If you want to learn more about the Noble, or any of the classes I mentioned, check out the classes section on the official website! I'm off to practice with my all-medic squad! Until next time, dood!

Yours in Prinny,
- Jordan