Legend has it the unrivaled blacksmith Shikizaki Kiki's masterpieces, the 12 Klesha Bringers, led the Sengoku Period of Japan. The "Land of the Rising Sun" was unified as one nation under one man.

However, this man, the Old Shogun, feared a rebellion and enacted the notorious policy known as Katana Hunting, where 988 of the 1,000 katanas Shikizaki forged were collected. Despite the policy, 12 of his true mastercrafts were left uncollected. The other 988 were merely experiments created for the sake of perfecting these 12. These 12 final katanas are known as Klesha Bringers.

The 7th generation master of the sword art Kyoto Ryu, Yasuri Shichika, and his older sister Nanami live on the isolated Fusho Island. One day, a female Shogunate official dispatched to collect the Klesha Bringers, Togame, pays a visit to this island...

Yasuri Shichika and the Stratagemist Togame have reached the middle of their katana-collection journey. Realizing that Togame has so far succeeded, Princess Denial initiates countermeasures to simultaneously help and hinder the woman she hates the most in the world.

The final few katana are held by even more fierce and even more dangerous foes, not to mention the Maniwa Ningun, who grow more and more desperate to reclaim their village's honor.

It is up to the power of Kyoto Ryu and Shichika to see this journey to its completion, accomplishing what the Old Shogun tried to accomplish with an army of thousands. His only weapons are his fists and Togame's always-devious stratagems.

When they learn one of Shikizaki Kiki's katana is held by none other than Shichika's sister, Nanami, they find it prudent to locate her as soon as possible. The only problem is figuring out how to turn the tide of battle against her near-omniscient skill of observation... 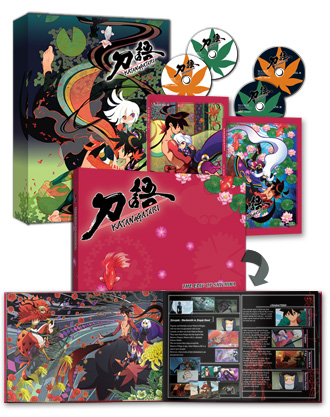 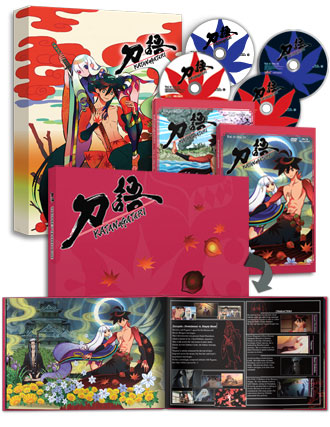 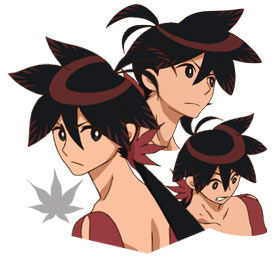 The 7th generation Kyoto Ryu successor. He is the main character and a master of Kyoto Ryu, a "sword art" for unarmed swordsmen. As a child, he and his family were exiled to a desolate island. Because of his isolated upbringing, he lacks some social sensibilities. He hates thinking about complicated issues and is rather lazy. Since his father raised him not as a human but as a katana, he seems indifferent to many things. 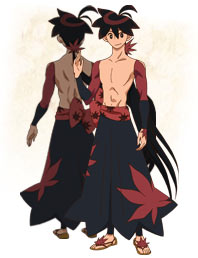 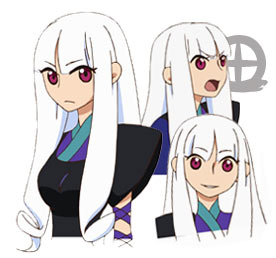 Proposed the katana procurement project. She carries the title "Owari Shogun Yanari's Direct Domain Delegated Director of Defense." As she claims to be a "Stratagemist," she has sharp observational skills and is very creative. She normally puts on an air of regality, but sometimes panics and acts like a child. 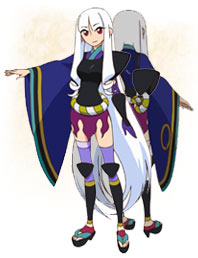 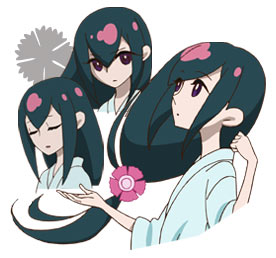 Shichika's sister. She is a beautiful and graceful woman, whose personality is nearly the opposite of Shichika's. Even though she is unwell, she enjoys housework and is very reliable. 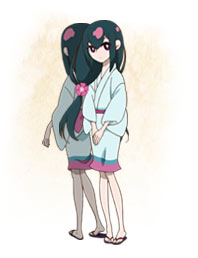 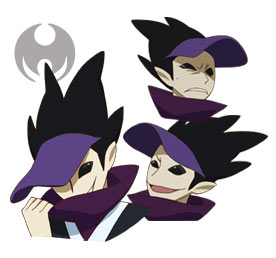 One of the 12 Shadows of the Maniwa Ningun*, also known as the "Bat of Meido." He belongs to the Beast Unit. His ninpo allows him to contain any object inside his body. His voice is high-pitched and his laughter is very unique.
*Maniwa Ningun: A ninja army. Unlike conventional ninja, they don't like to act in groups. Because of that, they are governed by twelve leaders, called the "12 Shadows." 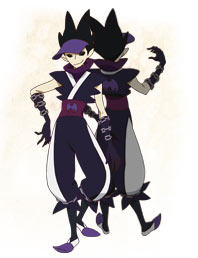 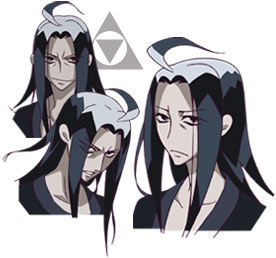 An expert of iai-nuki skills, this ronin insists on residing in Gekoku Castle, a desolate fort swallowed by an ocean of sand. He owns "Zanto Namakura," which has been passed down from generation to generation within his family and is said to be capable of severing all worldly things. 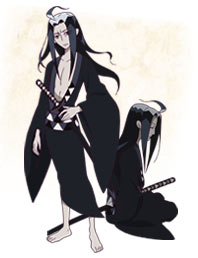 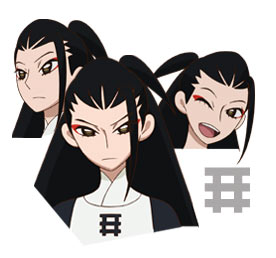 A mysterious woman who takes charge of Sanzu Shrine in Izumo as its abbot. She may look feisty and wild, but in fact, she calmly holds onto the shadow of her sad past. She is very tall for a woman during this time period. 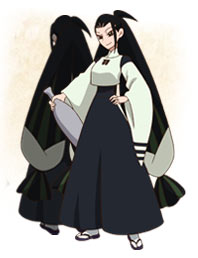 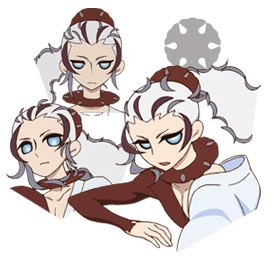 Known as the "Fallen Swordsman," or more commonly, "Japan's finest." He betrayed Togame when he had obtained Hakuto Tsurugi, succumbing to his ambitions of becoming the lord of this Klesha Bringer. Togame thinks his betrayal was brought upon by the katana's dark influence. His only interests are Klesha Bringers and swordsmanship. Nothing else seems to matter to him. 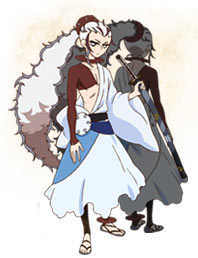 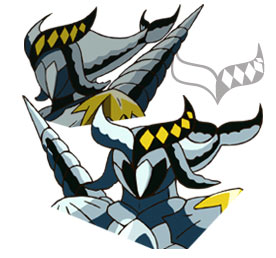 Captain of the Yoroi Pirate Raiders who control Satsuma's Dakuon Port. He is the owner of Zokuto Yoroi, which resembles a suit of Western armor. There is a coliseum in Dakuon Port where Azekura is the most popular gladiator. However, no one has ever seen his face. For a certain reason, he swore to himself never to remove Yoroi in public. 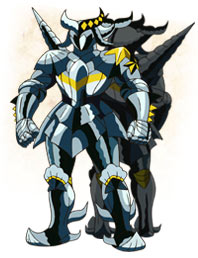 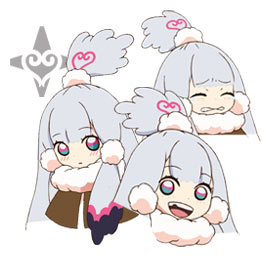 A little girl of the Itezora tribe residing on Odori Mountain, a first-class hazard zone in Ezo. She is a very kind and affectionate girl. She rescues Togame and Shichika when they nearly freeze on the mountain. For some reason, her entire tribe has been annihilated. She has been all alone since then. 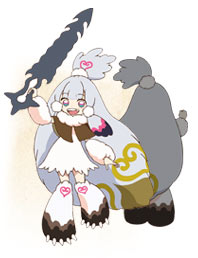 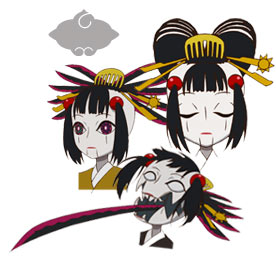 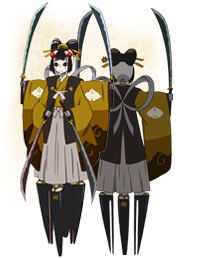 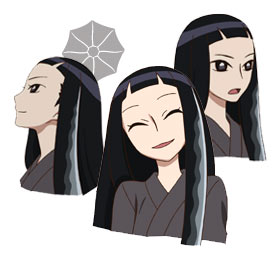 The 12th Shin'o Isso Ryu master, who has a dojo in Shogi Mura in Dewa. Dewa is a sanctuary for shogi players. Unlike other Klesha Bringer possessors, she is extremely diligent and sincere. Not only is she good with the sword, but she is also a great shogi player. 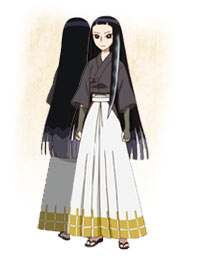 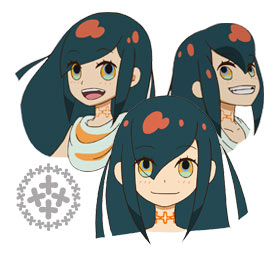 A sage living at Hyakkeiba in Oshu Mutsu. Depending on who she faces, she takes a myriad of forms, from a young female to an old man. She claims to be 300 years old. 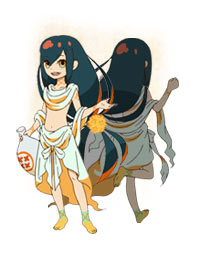 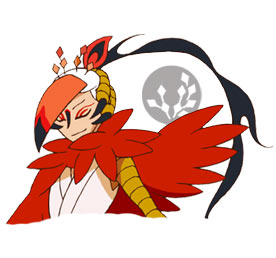 De facto leader of the Maniwa Ningun, also called the "Phoenix of Divinity." He possesses strong intellect and formidable battle skills. He currently seeks a truce with Togame and Shichika, but for certain reasons, they must inevitably face one another in battle... 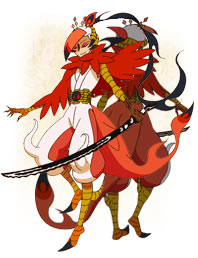 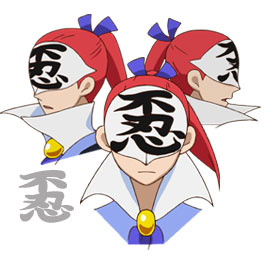 Lady Denial's loyal vassal. His profile has yet to be revealed. 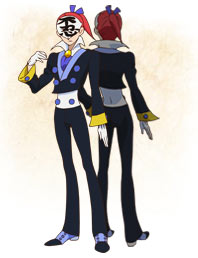