Interview with Sayaka Oda, Creative Mind behind The Cruel King and the Great Hero!

Home / Blog / Interview with Sayaka Oda, Creative Mind behind The Cruel King and the Great Hero! 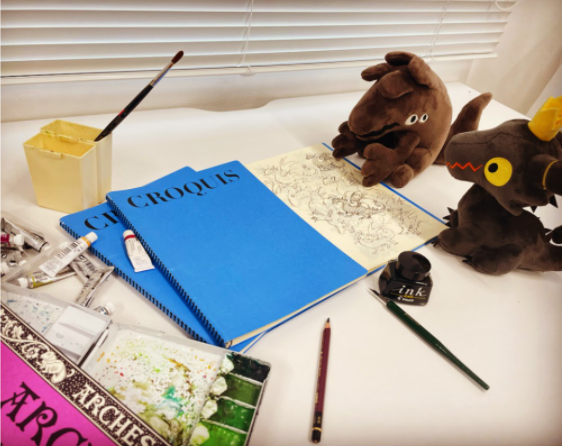 The Cruel King and the Great Hero!

The Cruel King and the Great Hero follows the storybook adventures of protagonist Yuu within the beautiful, hand-drawn world created by Sayaka Oda. You may recognize Oda-san from her previous works such as The Liar Princess and the Blind Prince. She is a talented artist and writer who has worked hard to bring us meaningful stories, and charming characters within her works.
This interview focuses on many of the behind-the-scenes aspects of game creation for The Cruel King and the Great Hero, and her creative process that brings stories to life from beginning to end.

What inspired you to place so much of the story’s focus on a young girl? What is the significance of a child being the main focus in The Cruel King and the Great Hero?

Like The Liar Princess and the Blind Prince, to tell the unique story I had envisioned, it was necessary to have a pure and innocent heart that was not limited solely to childlike innocence. Also from the large body of a beast to the small body of a little child, I like to have different body sizes to express the different species.

This time I really wanted to have an energetic and active girl that would drive the story forward. The gap of having a girl be a hero is one of my highly recommended points in the game. It’s my perspective, but I feel that a dragon and a little girl is more quaint, while a dragon and a little boy would be more of a buddy relationship. Of course I like stories about beasts and people, and pairing dragons and boys too! Actually, I like all sorts of pairs.

I will touch on this a little in the next question, but when I was a student I experienced having a dream of becoming a picture book author, but I had given it up. However upon entering the kikakusai, an event where everyone is welcomed to pitch their own plan for a game, I received a comment saying, “why don’t you try making it like a picture book?” This reminded me of my dream of becoming a picture book author, and being in the gaming industry, my wish of making a game with picture book elements led to my conceiving the title The Liar Princess and the Blind Prince.

I love warm stories and analog illustrations, so a picture book-like theme allows me to draw to my heart's content.

What I like about picture books is that they are not bound within a frame, and can be expressed freely through various types of illustrations.

How did you get started in the video game industry?

It’s a little embarrassing, but as a student I dreamt of becoming a picture book author, but that was not very realistic and so when I gave it up (I didn’t have enough willpower to become a picture book author while doing part-time jobs) my next option that came up was the gaming industry, since I played games from a young age.

When I was a kid, I saw a magazine called "Dengeki PlayStation" in a bookstore, and on the cover was a familiar illustration with the characters from the original Disgaea all lined up. I remember I became so impressed with that image that I bought the magazine right then and there, and excitedly pre-ordered the game as soon as I could. I hope to be able to create something that catches people's interest and makes them want to play it in the same way Mr. Harada's illustrations did for me... That's one of the reasons I had such admiration for character design, along with a strong desire to put my own characters into games!

(Although later on I would learn that a character designer's job is a very rocky and hard road).

What has your experience within the video game industry been like? What advice would you give to young women looking to pursue a career in video games?

Actually I joined the company as a game development designer but I was not extremely good with drawing, so I moved into marketing development without having done much development work, and really don’t have much to say about my experience in the gaming industry…(laugh). Usually I’m designing the home pages for games.

While working on the marketing team, I wasn’t able to give up on my dream of doing character design, so once in a while when development would give me design work I would jump at it, though it did not amount to much and there were times I would cry wondering, “will I never get to do character design again…?” But, after joining the Nipponichi Kikakusai The Liar Princess and the Blind Prince was born and because of fans I was able to make The Cruel King and the Great Hero.

Regardless of your gender, if you have something you want, don't give up, and make sure that you make that known. Failure will become fuel. Please value your own uniqueness and individuality, I’m sure it will shine in the most unexpected way.

What inspired you to create Yuu and the Dragon King and their relationship?

Actually the idea comes from a series that I was drawing about a story between a dragon who doesn’t have a bad heart, and a human princess.

A dragon who is a demon king must be defeated by a hero. But what if that demon king meets the daughter of the hero? Then what would happen…? I wanted to draw the drama between different species that would stem from such a situation.

If you could own any of the creatures from The Cruel King and the Great Hero as a pet, what would you pick?

All the characters have one or two quirks, but I feel like the racoons and moss toads would heal my heart since they are so fluffy. And the rabbitrouser talks and helps out a lot, so I feel like it would be fun to have it around since it would bring out a more homely feel.

I don’t know if I can convey it well but I would like to live with the bird-like character that appears in the second half of the stages, the one that it’s hard to make out what it’s thinking about.

What new storytelling techniques did you try in The Cruel King and the Great Hero that you did not try before in any other title?

Besides the main story, by helping others I was able to add more readable episodes.

Through the interactions with the villagers I was able to convey each of their cultures, which enabled me to express the world in which the game takes place with more detail compared to The Liar Princess and the Blind Prince.

What challenges did you face while working on this title?

For this work, all the backgrounds have been drawn by hand using pen and watercolor, and on top of that, I challenged myself to make them move.

I hand drew each tree branch separately myself…I drew and drew… but I couldn’t see the end. But wanting to see my fans happy, I kept adding objects and ended up with more than 100 pages, and the number of projects were ??? (I’ve never counted them)...I almost threw it out since it was a tremendous amount of work.

But because of all that I feel like the background has come to life.

Do you relate to any of the characters in this title? Who are your favorite characters?

Relate,…I wonder who, but like Yuu I cannot ignore someone who is alone and in need of help, I really understand the want to help someone. I always want to make people happy.

My favorite character is Cybat, he has so many facial expressions and emotions, and I really think he’s cute.

One of the notable features of The Cruel King and the Great Hero is that anyone can pick it up and play it, even children. Why was it important to make this title accessible to everyone?

I wanted to express a picture book-like-world, and kept the gameplay very simple because I wanted to attract people who are not really used to enjoying games.

I believe that The Cruel King and the Good Hero’s experience changes depending on whether you look at it from a child’s standpoint or an adult’s standpoint, so it would make me happy if the whole family could enjoy it.

What is your favorite part of The Cruel King and the Great Hero and why?

On a very personal level, I really like how there are a lot of villagers and monsters. I really like beast characters so it makes me happy. I drew designs to my heart's content.

I feel like the charm point is that each character has their place and are main characters rather than just being another NPC or enemy monster.

What would you say is the biggest theme, or take away, from the story of The Cruel King and the Great Hero?

Because the species in the story are different, it was possible to write this story..

This time the main story is important, but even the side stories depict different forms between the species. Of course I hope the main characters make a lasting impact on people, but as much as them I hope the villagers and other monsters make lasting impressions too.

Is there anything you would like to say to the fans?

In this work there are several gameplay elements that allow the player to learn more about the world, so I hope that players will make lots of detours and look at the scenery, sometimes help those in need, and with Yuu if they could go on an adventure in a world like the one in this picture book.

I hope Yuu’s story will stay in everyone's hearts.